A downloadable game for Windows and Linux

Things that changed since DD22 that I can remember:

Attempts to fix [Blue]'s boss not loading and [Blue]'s tutorials not working either
Very slightly modified [Red]'s GS tutorial
There was a crash related to the graphics menu, should be fixed now
*This version is after my project file exploded and I repaired it, so something else might have hecked up that I didn't realize; Last one unless there is some other major crash bug

I modified the physics a little bit, so something evil might have awoken.

Note: movement controls on keyboard use WSAD by default. Menu controls use arrow keys, but you can also use the mouse.

*Linux version was tested with Ubuntu, though the computer it was on was pretty old I don't even think it can run OpenGL ES 3.0 so the graphics were seizure inducing

I'm probably going to skip the next few demo days as I might not have a lot of time to work on the game this year, though it will probably end up looking like the same amount of work I do normally. Also try out more asset attempts. 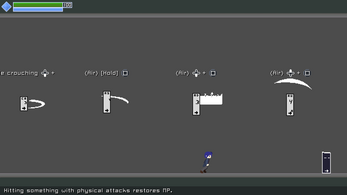