A downloadable game for Windows and Linux

*Tl;dr: If you played the DD21 version, not much has changed. Some bug fixes and a more complete options menu is really all that's different.

Things that I can remember that changed from DDXXI:

It's like the DD21 version except with slightly more features. Video games killed me so I didn't get much done compared to the previous version.

//Temp How to Do things

Usually you can do a different move by pressing one of the attack buttons + a direction; (Left/Right + attack is the same as pressing no direction + attack) The bar below the Green HP bar is for the Special/Magic attacks

Magic + No direction/Left/Right - A basic 3 hit attack, does multiple hits and gets stronger with more hits

Magic + Down - Ice hocky puck. Can be hit to move around. Has negative launching properites on explosion (so an enemy in the air will fall downwards). After exploding, it leaves a small AoE that does tick damage for a while until it disappears

Magic + Up - Hold the magic button to increase the distance of this attack. Has launching properties. Will try to force itself to the ground.

Physical/Standard Attacks Restore the MP bar (For both characters)

[Blue] is able to wall jump by holding a direction towards a wall (to go into wallhug) and then pressing the jump button. [Red] can not do this.

I'm not good at feedback but I wanted to try anyway. Got something recorded but turns out that my mic is dead so have this instead.

Edit: forgot to say that I enjoy your progress. You are doing great

Thanks for playing. I made updates to the game to fix some of those things listed. I'm not sure if the crash I fixed with the boss is the same thing that caused your crash though; it appeared to happen at a different time compared to the other crash and I can't seem to reproduce it. 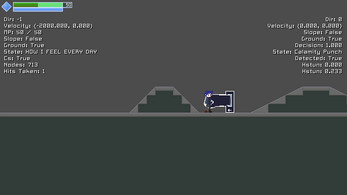