A downloadable game for Windows

Things that I can remember that changed from DDXX:
Imported [Blue], Blue is a more technical character compared to [Red]
Imported [Elemental Earth], the first boss for [Blue] (Slightly Janky at the moment)
Modified state changes for the player character, so theoretically controls should be a bit smoother
Partially Imported the Title Screen
Fixed a bug where enemies would sometimes ignore hitbox launch properties

It's like the DD16 version except somehow with less features.
Currenty the controls can't be rebound. I have to figure it out again as Godot 3 is a bit different compared to 2.1.4 and I ran outta time.

//Temp How to Do things
Usually you can do a different move by pressing one of the attack buttons + a direction; (Left/Right + attack is the same as pressing no direction + attack)
The bar below the Green HP bar is for the Strong/Magic attacks

[Blue] moveset somewhat explained:
Magic + No direction/Left/Right - A basic 3 hit attack, does multiple hits and gets stronger with more hits
Magic + Down - Ice hocky puck. Can be hit to move around. Has negative launching properites on explosion (so an enemy in the air will fall downwards). After exploding, it leaves a small AoE that does tick damage for a while until it disappears
Magic + Up - Hold the magic button to increase the distance of this attack. Has launching properties. Will try to force itself to the ground

Physical/Basic Attacks Restore the MP bar (For both characters)

[Blue] is able to wall jump by holding a direction towards a wall (to go into wallhug) and then pressing the jump button. [Red] can not do this.

v3 - Attempt to fix crashes when boss dies at specific moments; Added note that [Blue] can walljump in readme 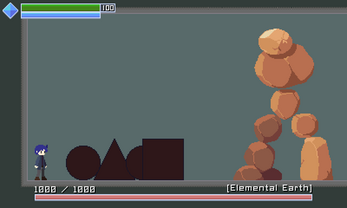 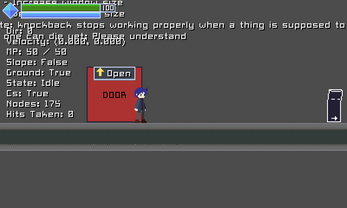 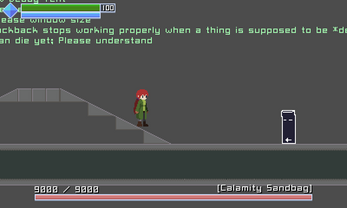